Now we’re walking to the Forbidden City, and it seems like we’re walking for miles and we’re practically exhausted before we get started on the main tour.  I’m not sure if we received a map of the city, but one is certainly needed so that you can navigate the many features, buildings, and walkways. 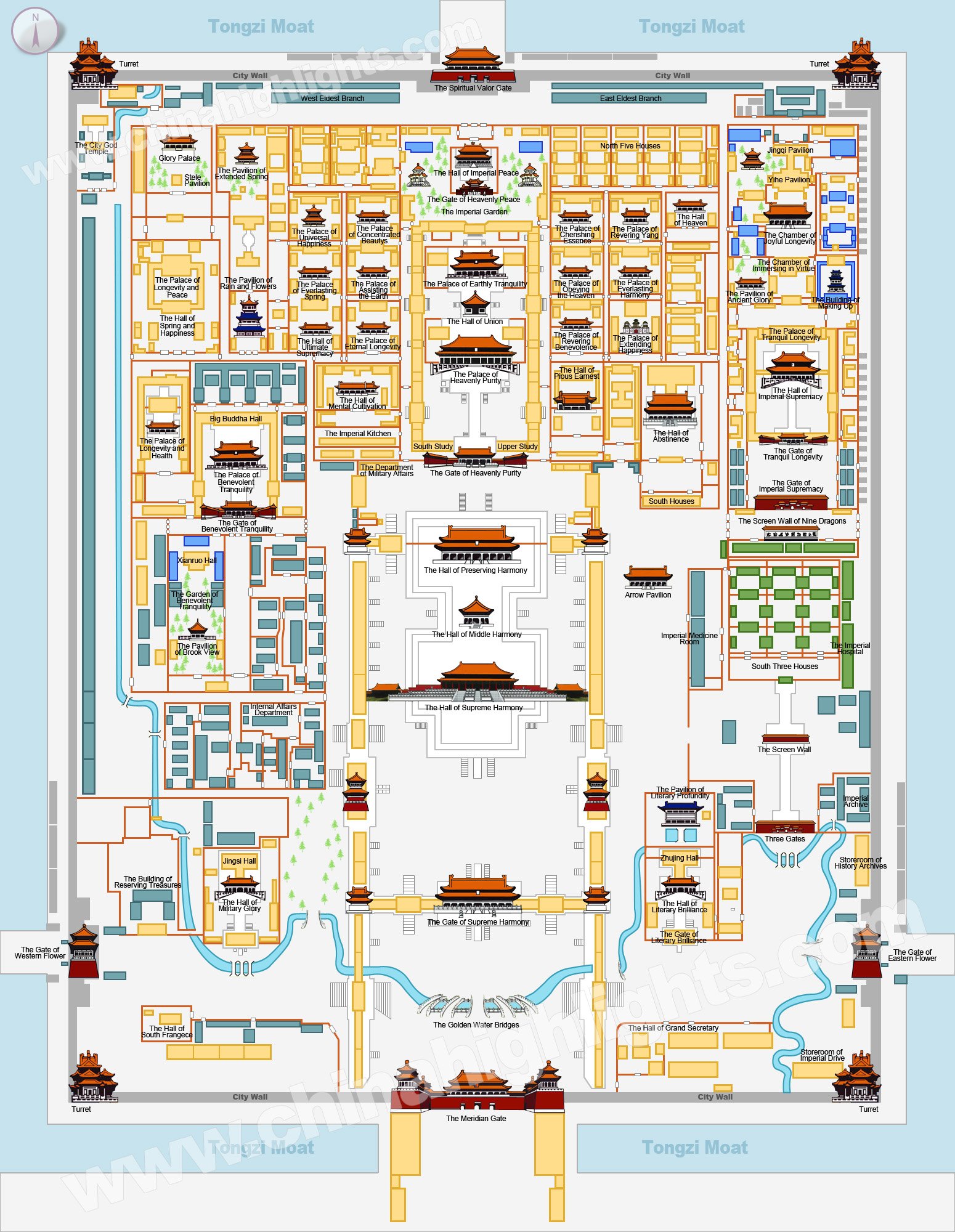 There are tour groups everywhere in the large courtyard outside the gate, most likely getting a lecture on the last of the Chinese emperors about that time Sun Yat-Sen proclaimed the new China around 1912.  We were no exception, and it was an interesting way to spend the time waiting to get in.  It was a tale of intrigue, interwoven with a 3-year-old emperor, and a scheming concubine who becomes the Emperor’s favorite, enough to bear him a son and successor.

Bribery and corruption at its best.

The Forbidden City is was once the imperial and state residence of the Emperor of China, as well as the center of government, from the Ming Dynasty to the Qing Dynasty, or 1420 to 1924.

It was built from 1406 to 1420 when the Yongle Emperor moved the capital from Nanking to Beijing and consists of about 980 buildings, and 8,886 bays of rooms (not the 9,999 as prescribed in myth) and covers 180 acres.  Over the 14 years, a million workers used whole logs of wood from the jungles of southwestern China, marble from quarries near Beijing, specially made golden bricks from Suzhou

Since 1925 it has been a museum and is the largest number of preserved wooden structures in the world.

The city is surrounded by a wall 7.9 meters high, and a moat that is 6 meters deep and 52 meters wide.  A tower sits at each of the four corners.  Each side has a gate, the north is called the Gate of Divine Might, the south is called the Meridian gate.  East and west are called East Glorious Gate and West Glorious Gate respectively.

But, back in the courtyard, we are ready to go in and follow the tour guide who has switched from her amplified microphone to a whisper device we all wear in our ears.  She talks and we listen.

We all make it through and regroup on the other side. This is where the fun begins because we are about to meet a large percentage of the 80,000, they let for the day.

It seems to me they have all arrived at the same time, although by the time we get to the entrance gate, it is very well organized, bags are scanned, people are scanned, and you’re in.

After crossing one of the seven Golden Water bridges, you begin to get some idea of the size and scope of the City, and in the distance, the first of the buildings, The Gate of Supreme Harmony.  On a hot day, that could be a long and thirsty walk.

From there it is one pagoda after another with buildings that surround the edge of the whole Forbidden City, as does the moat.

By the time we get to the second courtyard, it was time to have ice cream as a refresher.  Others head up to another exhibit, and it’s just too many stairs for us.

After this, it’s a walkthrough another courtyard, heading up and down some more stairs, we go and see the museum, with priceless relics from past emperors.

There are areas like the outer courtyard, the inner courtyard, yet another courtyard, and the gardens where the concubines walked and spent their leisure time.  It is not far from the emperor’s wives living quarters, though there’s precious little left of the furniture, other than a settee and two rather priceless so-called Ming dynasty vases.

We get into the bad habit of calling all of the vases Ming dynasties.  Above is one of the inner courtyards there were living quarters, and that tree is over 300 years old.

Out through some more alleyways and through an entrance that led to the area where the concubines lived, very spacious, bright, and filled with trees, plants, and walkways through rocky outcrops.

The whole area was made up of living quarters and waterways, rocks and paths, all very neatly set out, and it looked to be a very good place to live.

This is an example of the living quarters, overlooking the gardens

And there were several pagodas

From there its a quick exit out the northern entrance, and another longish walk to our bus, which arrives at the meeting point shortly after we do.

That done, the Beijing tour guide has completed her section of our China experience, and we’re ready to move onto the next.