The castle is located in the southern Chianti Classico countryside and has been there for over ten centuries, and owned by the Ricasoli family since 1141.

Like any good castle, it has strong defences, and I was looking for a moat and drawbridge, but it looks like the moat has become a lawn.

The castle has been destroyed and rebuilt many times over the last 900 years.  It was part of the Florentine defences, and withstood, and succumbed to many battles with Siena, which is only 20 km away.  More recently, it still bears the scars of artillery fire and bombing in WW2.

The room at the top of this tower would have an excellent view of the countryside. 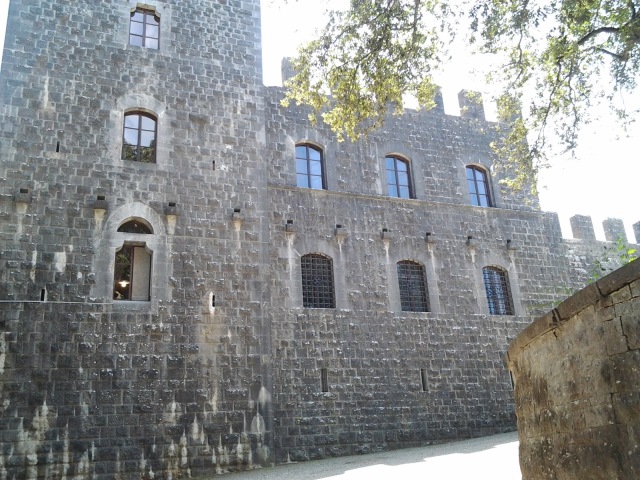 Here you can see the old and the new, the red brick part of the rebuilding in the 1800’s in the style of an English Manor

We did not get to see where that archway led.

Nor what was behind door number one at the top of these stairs.  Rest assured, many, many years ago someone wearing armour would have made the climb.   It would not pass current occupational health and safety these days with a number of stairs before a landing.

Cappella di San Jacopo.  Its foundations were laid in 1348.

Renovated in 1867-1869, it has a gabled façade preceded by a double stone staircase.  The interior, with a crypt where the members of the Ricasoli family are buried, has a nave divided into three spans with cross vaults.

The 1,200 hectares of the property include 240 hectares of vineyards and 26 of olive groves, in the commune of Gaiole.